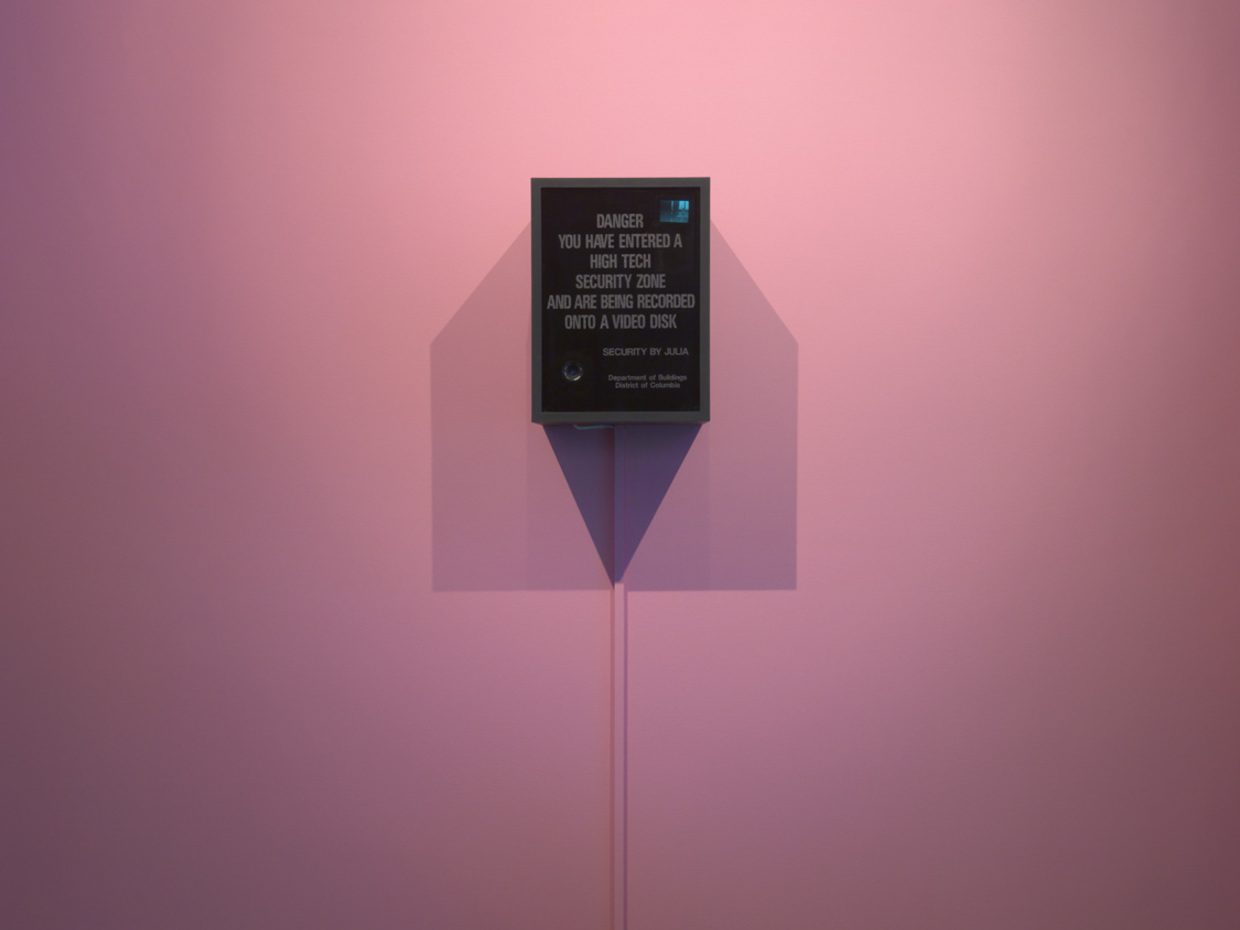 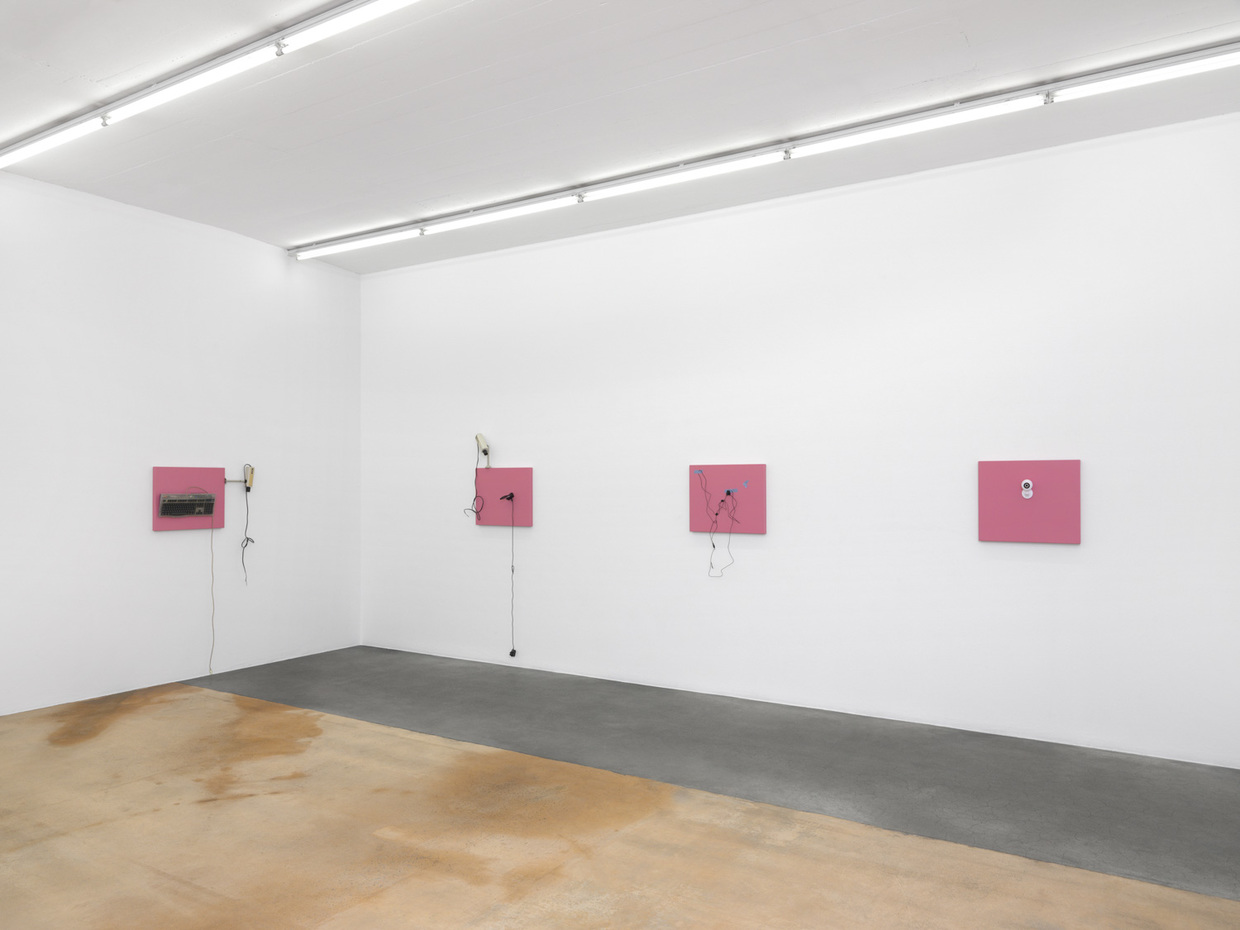 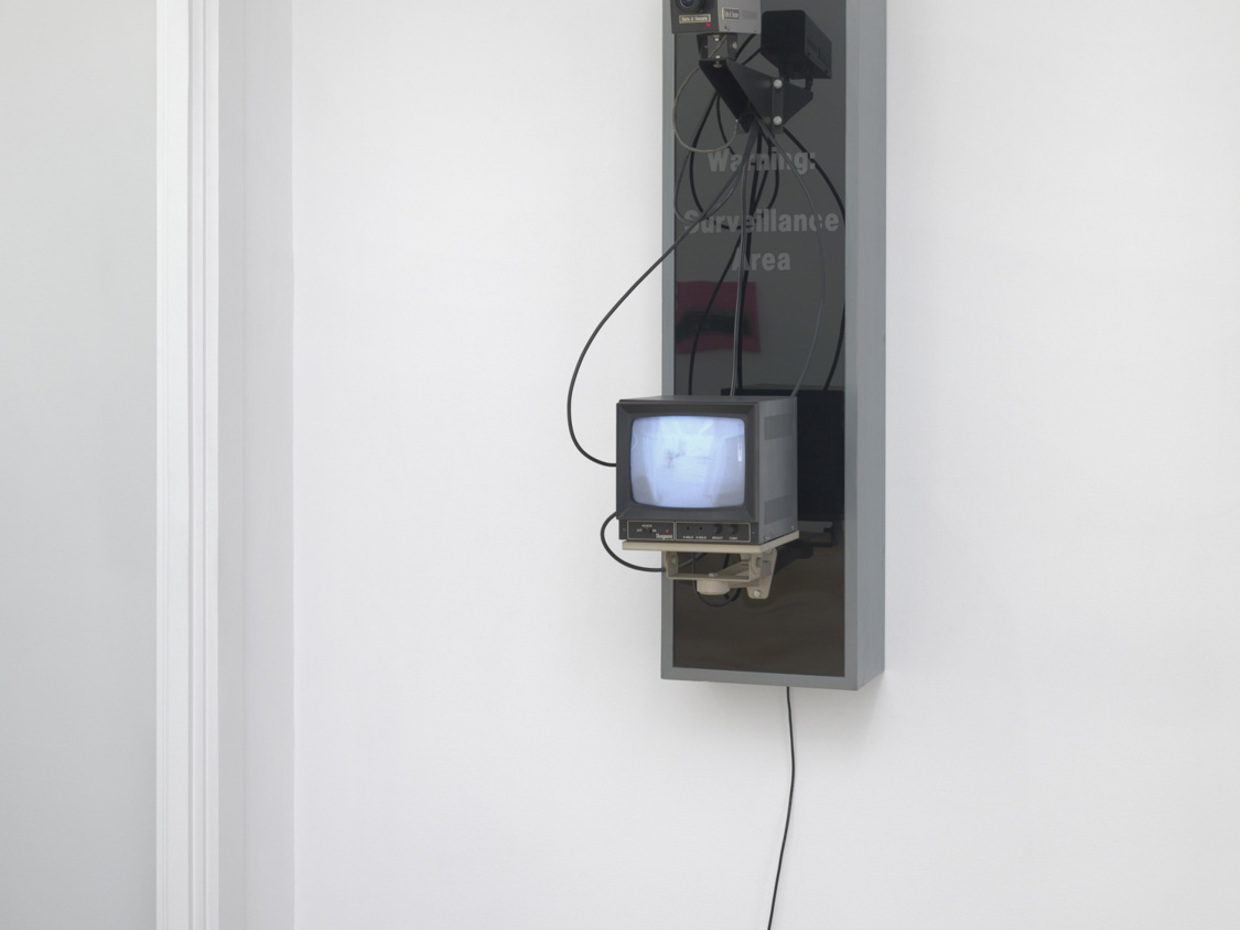 The work of Julia Scher (b. 1954), which first appeared in the 1980s, is noteworthy for its systematic use of surveillance techniques, particularly CCTV. Scher’s technical background provided her with in-depth knowledge of a range of surveillance systems. She worked at a well-known security firm for a period of time before setting up her own company, Safe and Secure Productions. Each of Scher’s installations satirically transforms exhibition spaces into regimes of total control, and as such disturbingly alters the behavior of viewers, who unwittingly become both observers and the observed. At the intersection of both the Orwellian drive for absolute power and the voyeuristic or narcissistic world of intimate, self-referential recordings, Scher’s work presents a tongue-in-cheek reflection on the ideology of security and its dangers.

Invited to exhibit in the midst of the museum’s collections, Scher has chosen to greet visitors with an updated version of the artist’s Girl Dogs (2005–2021)—twin Doberman statues in marble. The very embodiment of the watchdog, and (wrongly) renowned for its aggressiveness, the Doberman is a breed that is commonly associated with ferocity and law enforcement. Scher has added, however, feline qualities to these dogs’ faces and paws. Their pink color (ubiquitous in Scher’s work) seemingly transforms them into gentle, vulnerable creatures. The greeting they convey to visitors is akin to the tonalities of a warm, anonymous voice typically used for public announcements.

Intended to reassure the viewer, the dogs’ seemingly benevolent presence actually induces feelings of unease. This ambiguous, psychosocial aspect of surveillance serves as raw material for Scher. In an upper corner of the room, we find a poorly disguised camera placed in the midst of a bouquet of carnivalesque fuchsia-colored feathers. As reflected in its title–Hidden Camera (Architectural Vagina) (1991–2018)—the work is vaginal-shaped, evoking the feminist dimension present throughout Scher’s work. By employing a symbolic, formal vocabulary traditionally associated with the feminine (and thus with gentleness and benevolence) to cloak devices otherwise perceived as intrusive and repressive, the artist mockingly deconstructs the visual lexicon of the seemingly innocent.

As Anna Indych already noted in 2002: “Years before popular culture brought us ‘Jennicam,’ Big Brother and The Truman Show, Julia Scher made surveillance an art form.” Two decades on, in 2021, reality TV seems like old hat, relegated to late night slots on cable channels. It is clear, however, that we live in an era of pervasive surveillance. On the one hand, social media and technological advances continue to intensify our obsession with recording the totality of our lives. On the other hand, whistleblowers have laid bare the extraordinary means that intelligence agencies deploy to spy on individuals’ lives. With a great deal of humor, Scher very early on grasped the mechanisms of social control at work in both the public and private spheres, questioning the logic of sacrificing personal freedom in the name of security. As she writes: “But most evidence indicates that living in the shadow of the burgeoning security apparatus (which encompasses both the public and private sectors) creates a steady state of paranoia and self-censorship and is heavily responsible for the gradual erosion of our freedom.”