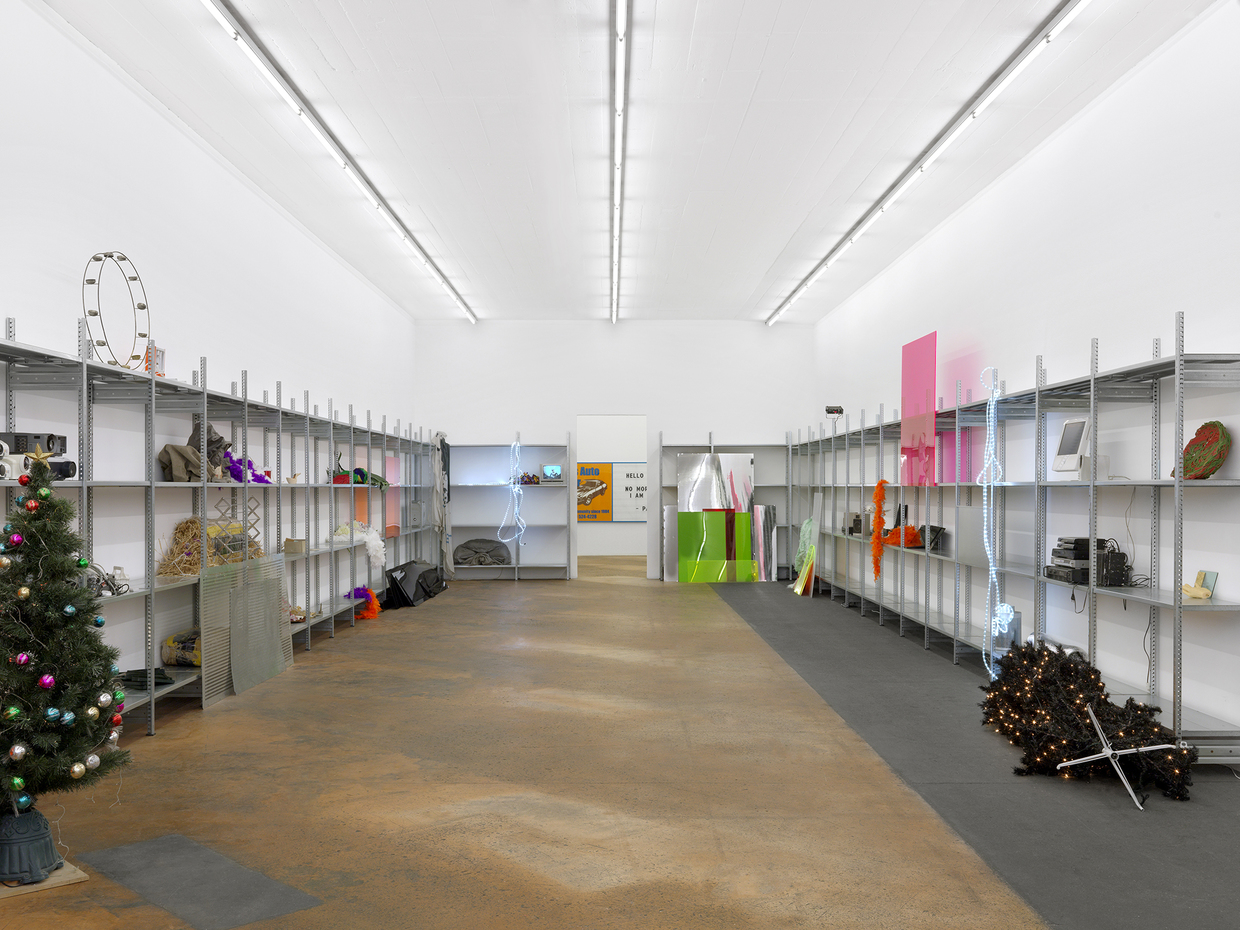 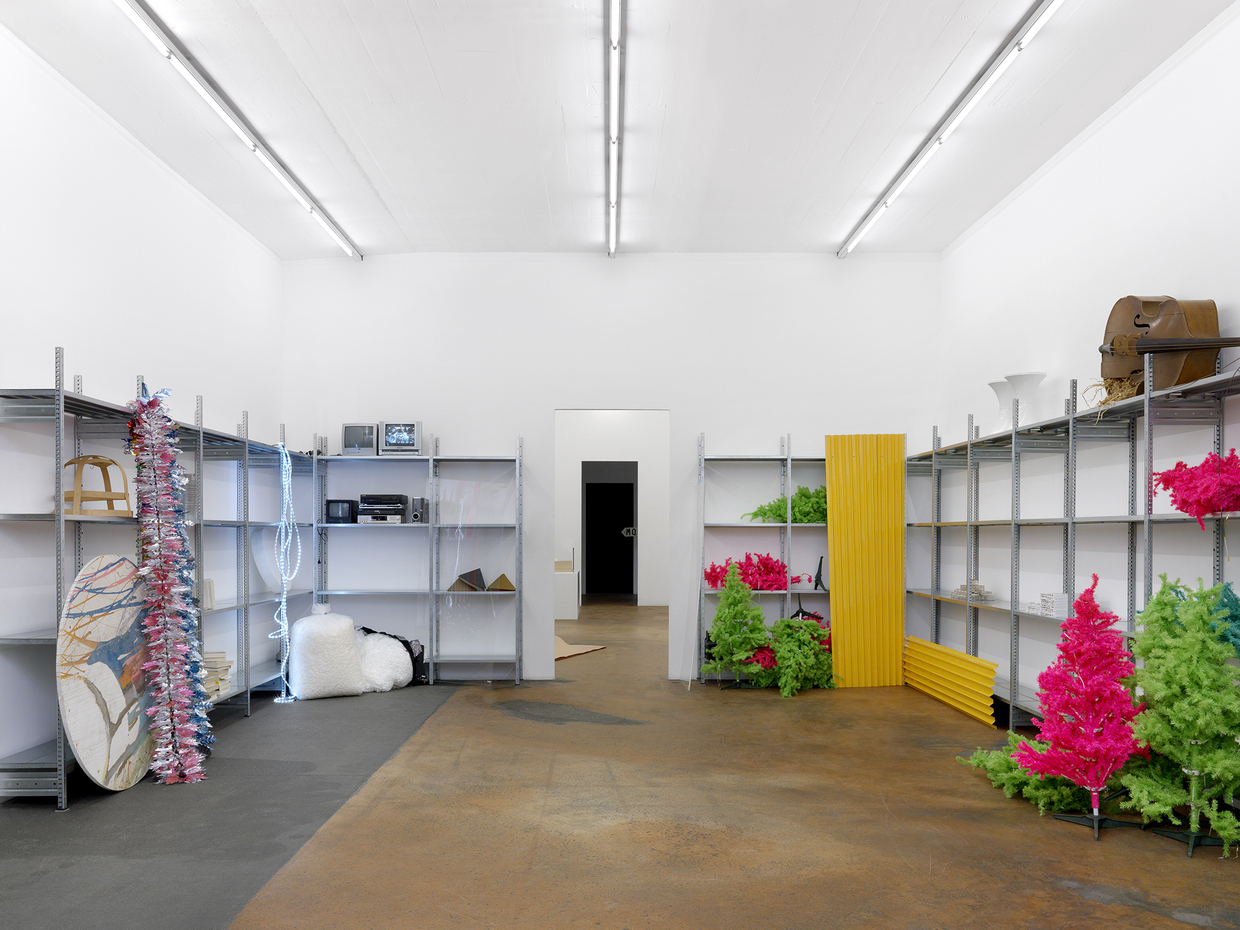 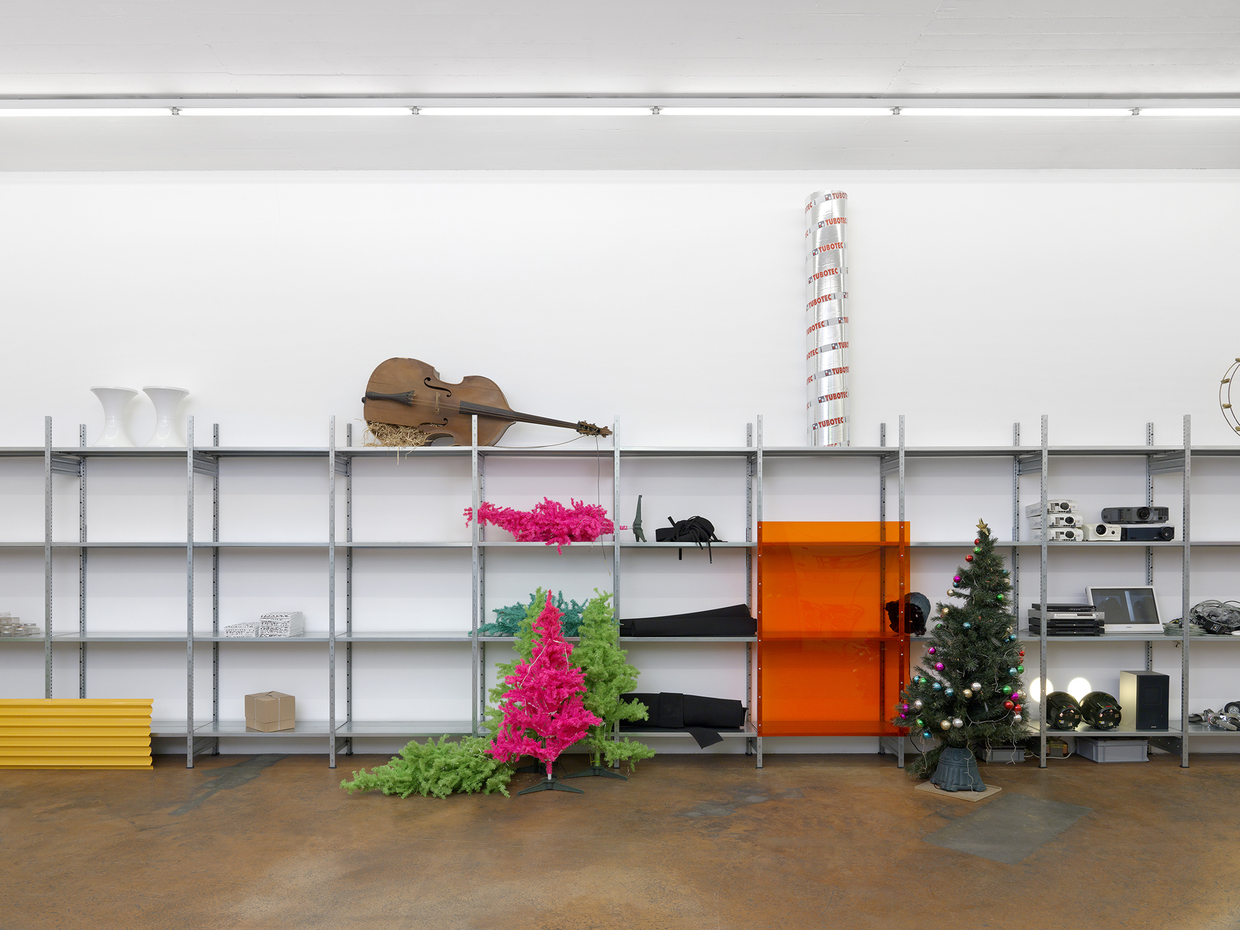 At first sight, the installation devised by John M Armleder (b. 1948) for London’s Dairy Art Centre in 2013, now re-created in a new version for MAMCO, resembles an industrial storage facility partly filled with an eclectic assortment of items (sheets of Plexiglass, artificial flowers, books etc.), and animated by audio and televisual elements. John M Armleder delights, it seems, in mixing styles and registers through his use of furnishings, artistic and decorative objects, natural and artificial materials to form an ensemble reminiscent of a shop interior, an artist’s studio, or the reserve collection of a museum—the assembled objects hark back to their commercial and industrial origins, or to the works of art represented by their fragmented remains.

Like John M Armleder’s earlier installations—featuring piled-up bottle racks, mussel shells, and sledges, with a nod to the figures of Marcel Duchamp, Marcel Broodthaers, and Joseph Beuys—the objects in Quicksand 2 remind us of what Arthur Danto has described as art’s power to “transfigure the commonplace.” The origins of this practice—the transformation of ordinary objects into artworks—lie of course in the “ready-mades” of the early 20th century, but also in American Pop art of the 1960s and in the “commodity sculpture” trend of the 1980s (including Jeff Koons, Haim Steinbach, and John M Armleder himself).

We might equally be reminded of the Wunderkammer or cabinets of curiosities assembled by collectors from the Late Renaissance onwards, featuring natural, scientific, and artistic treasures alike: ultimately, it is precisely these systems of classification that Armleder is calling into question. His work demonstrates how the power of display, the very act of organisation and presentation (however chaotic) will always prevail over the individual items presented. Artistry resides in the arrangement of the objects, their interrelationships, and the desire (however illusory) to harness them to make meaning. Nothing is ever wholly an original piece, or a reproduction, or a product of artistic or contrastingly commercial intent: things are always shaped in some way, and this is also an “art of context.”

These are the “quicksands” of the title, into which the artist invites the viewer to venture. John M Armleder’s installation crystallizes the preoccupations of an artistic career extending from the late 1960s to the present: the metaphor of the museum as a repository for the fragmentary leavings of artistic practice, the concept of a reservoir of  available forms for the shaping of a new work of art, or an assortment of items offered up by an improbable vendor.

In the 1970s, Armleder’s work with the Ecart group highlighted this non-distinction between every-day and artistic activity, in the wake of the Fluxus movement. In the 1980s, his Furniture Sculptures (as per Erik Satie’s “furniture music”) stressed this aspect of avant-garde practice and its ultimate fate. In the 1990s his Pour Paintings and murals stressed the ancillary role of the composition in relation to the vagaries of the artistic program. Since the early 2000s, his installations have showcased artistic (or curatorial) endeavours that hark back to the era of the “B movie,” when a set created for one screenplay would become the springboard for another. Today, as we discern the overall purpose and direction of this unique oeuvre, we can look into the heart of the maelstrom of forms, media, new creations and re-workings, gestures, and references and see—as in Edgar Allen Poe’s short story—how its swirling power draws everything in. As if the unblinking “eye” of the vortex was gazing out at us in its turn.