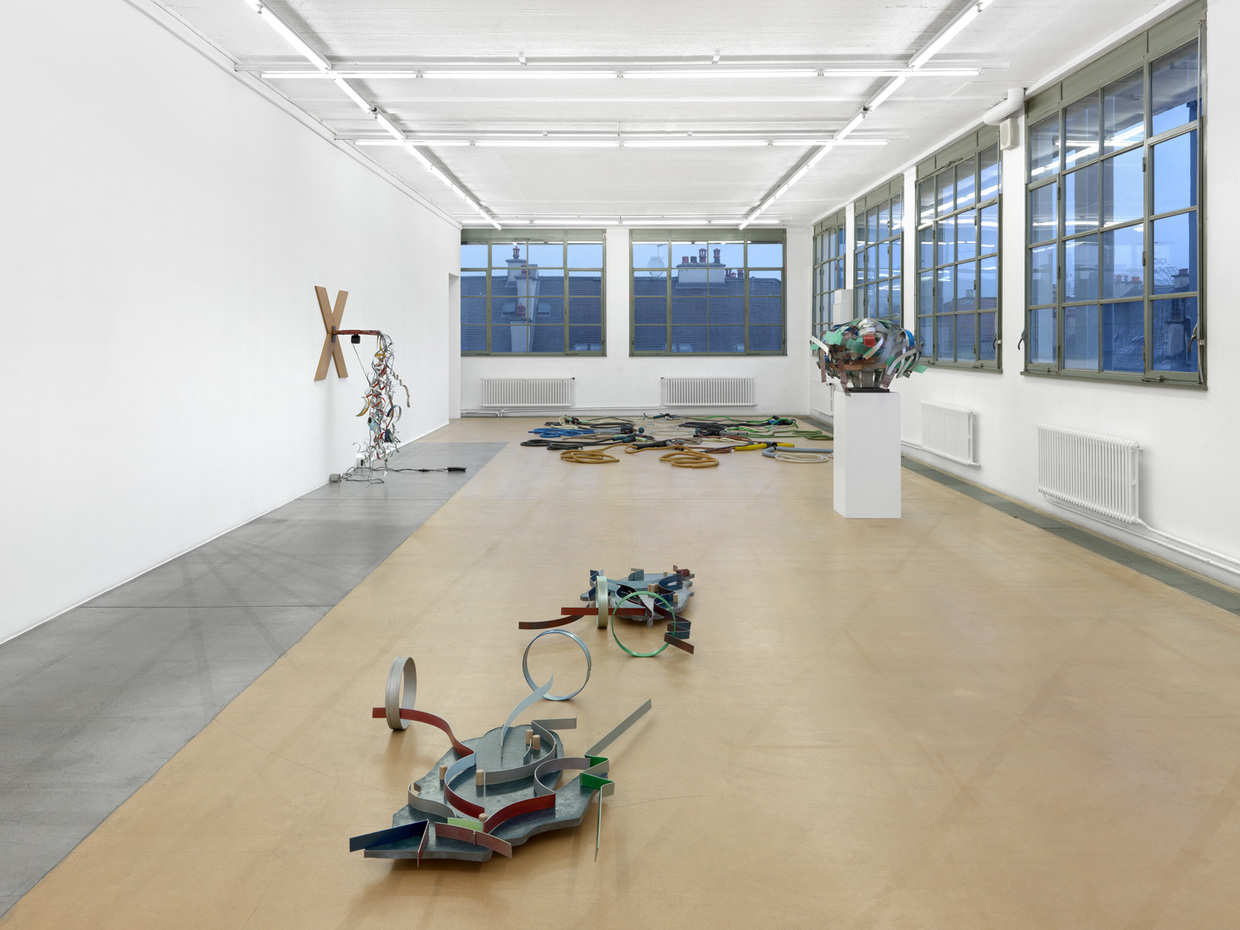 Dennis Oppenheim (1938–2011) became known in the late 1960s for his Land and Body art productions. For those ephemeral interventions, documentation in the form of text and photographs serves as more than a residual trace: it communicates the artist’s intention and process; the rest is up to the viewer’s capacity for imagination. After a brief hiatus in the 1980s, which marked a transition away from his past work, Oppenheim returned to making lasting physical structures, this time not in nature but in urban spaces. He would make preparatory drawings and models for each sculpture, and the three works from 1983 presented here are no exception.

Technology is a recurring theme in Oppenheim’s work, which adds a perceptible tension not only to the works’ titles but also in how their components interact, appearing as if mutable or dangerous. The carefully interwoven metal strips of Woven Explosion (Mondrian Under Pressure) appear like the inner workings of some infernal machine capable of unleashing compressed energy.

The Day Before Starry Night (From Vincent van Gogh), also dated 1983, channels Van Gogh’s violence and mental instability. Electrically or manually produced rotations and spinning movements are meant to evoke the painter’s agitation, and the wooden X that supports and pours forth string lights and metallic strips sets the scene for his self-mutilation the day before Christmas Eve, 1888. Tremors, be they produced by moving parts or hyper-mobile materials, are a signature element of the piece. Oppenheim has been quoted as insisting that he never created an art object that didn’t quiver.

And the Mind Grew Fingers. Extended Fortunes, also the title of a 1992 retrospective of Oppenheim’s work at MoMA PS1 in New York, focuses on the idea of form as a metaphor for thought. The giant, movable hands recall pinball machines that bounce an imaginary ball off their flippers.

Long Distance Anger-Rubber Hose (1992) is composed of figurines arranged in a circle and tangled together in a controlled electrical network of plastic tubes. Metal crocodile clips are paired with rubber and plastic to embody a contained yet palpable fury.

Like Duchamp’s “bachelor machines,” Roussel’s fictional art-producing devices and Tinguely’s self-destructive contraptions before them, Oppenheim’s “machine pieces” seek out points of fracture, attempting to break free from the formal constraints of his time.